At the time of writing I had already settled into a new studio and embarked on a world tour. Since most of my ideas have been a response to fairly banal, everyday objects and images it was hard to find inspiration out there travelling. The things that met my senses were stunning, beautiful and fascinating so inspiration to make artwork was lacking – I did not need my usual coping strategy. Now that I’m back my former strategy might be redundant. I did see a lot of exquisite art, especially in Japan on the island of Naoshima, in Chicago and NYC. It feels like time to stop operating in relative isolation. Now I have some idea what I’m doing it feels ok to take influence from the practice of others without compromising, or merely rehashing their work.

My new studio is almost exactly the same as the last one. I dismantled the whole thing saving as much of the material as I could (some of that material became crates) and reassembled it in a location that is seemingly not up for redevelopment due to a well-engineered legal clause that must be nothing short of poetry. 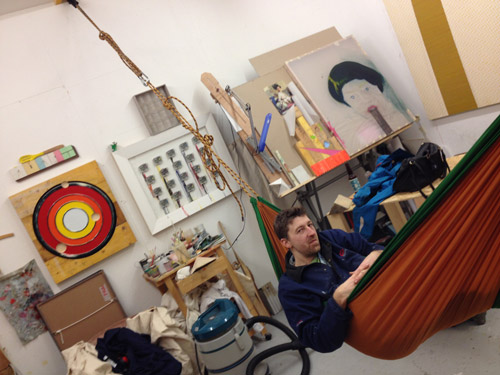 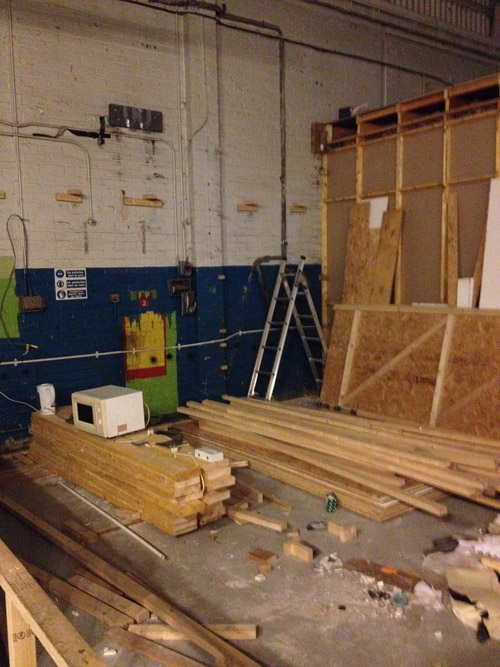 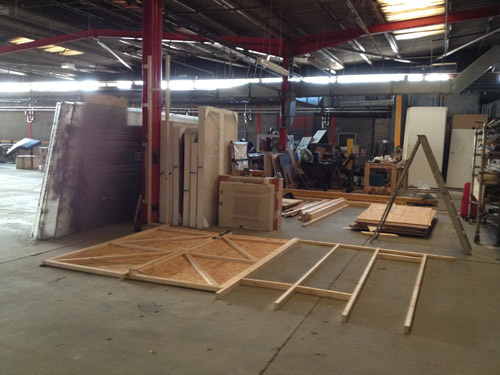 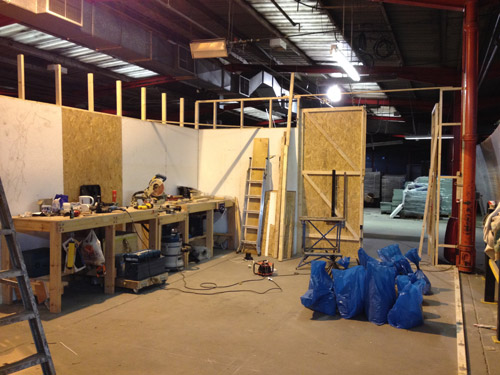 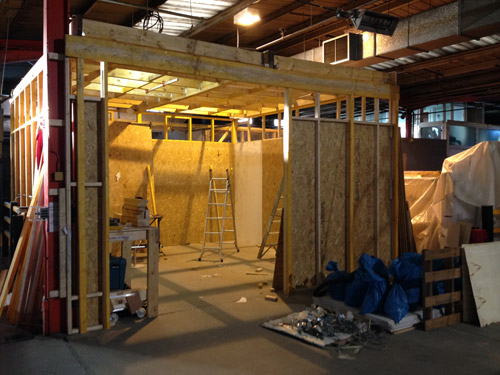 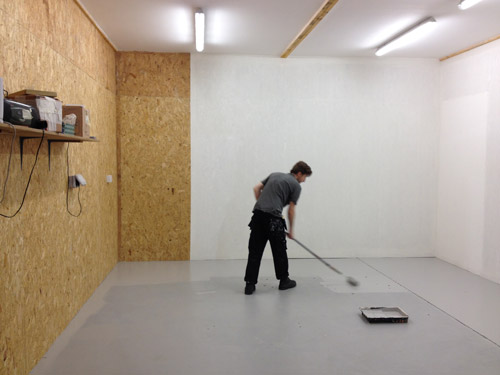 To briefly reiterate what I wrote above (when setting up this website) my work falls into two strands thus far: Paintings, which have tended to be on oil on canvas on a fairly large scale and Woodworks, which are mostly made of wood but include other materials and have painted elements. Quite often the materials of the Woodworks are reclaimed and inspire the work itself in some way as well as dictate its scale. Imagery for Paintings has often been sourced in found printed material. I am happy for the work shown here to fall under the umbrella of Pop Art, but in time I may deviate from this. By and large I stand by earlier writing below for those who wish to read it.

Of late the Paintings have begun to divert from the fairly exact (if grossly scaled-up) copies of source material and I have altered colours and added other elements as I see fit. I am also getting away from the hard edges seen in formative work. A painting in progress at the time of writing perhaps also transcends the division of Painting and Woodwork in that it is a large-scale work on canvas for which I have custom made a stretcher incorporating rounded corners to suit the source material. It now has a background akin to a sunset or sunrise (an afterthought without source material and entirely made-up on the spot). It remains to be seen where this will go but it may yet incorporate bird-shit derived from the earlier Metric/Imperial (2013) work and an element of figuration, which has yet to make it into any of my paintings from the drawings I mostly keep to myself.

So it may be fair to say that current works have an element of risk attached in making them. For example in Painkiller (2015), three holes were made in the already painted and varnished surface of the Woodwork in an unfolding composition, and this could have gone very wrong indeed in any number of ways. In work such as this I must be careful to judge my level of competence: Painkiller was the last piece completed in my former studio, where I felt my skills were well honed towards the end of my stay. But I’m always trying to learn new skills and develop new techniques to keep me interested. Work such as Painkiller shows that the art is sometimes in not sticking to a plan.

The two main strands to my work are oil paintings on canvas and what I now call woodworks (in answer to the question ‘what did you do today?’ the simplest answer was ‘a bit of woodwork’ – although these pieces actually involve all kinds of materials and often include painted elements). Both strands rely to a greater extent on everyday and, so far, urban imagery and material and are my take on Pop Art.

Pop Art traditionally relies on a certain degree of familiarity in its imagery but in the paintings I try to make use of marginal or largely overlooked material. There is also a reversal of the usual process of reproduction – I reproduce by hand something that is machine made in its original form. Was/Now (2010) is from a blank price reduction sticker made in untold thousands but unfamiliar without the usual deductions in marker pen. In keeping with the unfamiliar, there is an optical effect in some of the paintings, seemingly more so than in the printed original due to the way a large painting fills the field of vision. Niceday (2009) was my first large-scale canvas and an example of marginal, though ubiquitous material – it is the view from the inside of the eponymous brand of envelope and the first of a series of such envelope paintings. Niceday has an optical effect entirely incidental on my part but akin to a restless Bridget Riley painting. I have returned to the same pattern again in other recent works and I often wonder who designed it and if they know what happens when it is scaled up. Patternation causes a further effect when such work is viewed as a screen image, especially on a small screen – again it is something I quite like – the current technology of pixels has reached an impasse at the ancient technology of painting.

This technology I must have expanded upon to some degree: some of the reproductive paintings are problem-solving exercises from the start. Often drawing instruments and labour saving techniques must first be envisioned and then developed. I have become much more efficient since the early days as my technique has refined, but large patterned works are still labour intensive leaps of self-determination – I put the pain in painting. The process for me is a journey from the banal through the ridiculous to the sublime: so much intricate labour is lost in the overall final effect that it is almost impossible to appreciate the effort of a whole painting (I soon forget it), but the whole continually encompasses both micro and macro frames of reference.

Woodworks are the sculptural side to my practice and the antidote, in some respect, to the generally ascetic painting process. The works come about for varying reasons: Sometimes in response to a particular frustration, such as Cartridgeworld (2009-2012), a work that has outlived the vast majority of prints these ink carts have contributed to. At other times work is a result of an initially intuitive clash of found materials and a particular mindset, such as Domestic (1998-2014). I rely on found materials, though this is not always the case. I use discarded or purchased materials from the construction industry – bits of houses form the backbone – and it is in allowing these things to transform and combine that the work is produced.

In contrast to the paintings the woodworks are all machine-made to some extent and rely on mechanical tools and processes. Despite this they inform the shape of their own progress and so do not adhere to a strict plan in the way the paintings do – again something of a reversal of the usual process of mechanised production. The grid of Cartridgeworld took on a dynamic angle when it accidentally moved in the final stages before framing, for example. Domestic is an old work to which I recently returned. I resolved it by adding the partial mahogany frame resembling a drop-shadow, to which I subsequently added a gradiated paint effect. Untitled ‘Interior’ (2012-2014) changed dramatically when the dovetailed fire-door off-cuts and mahogany were added to the earlier underlying plywood structure.

Materials I am currently working with include timber off cuts, bits of broken furniture and other scraps – things left over from the construction of my studio, and articles that continually seem to wash up around it, are becoming a new body of work. This studio is the largest woodwork to date: Studio (5x5x3m, timber, OSB, plasterboard…) – it may yet be the first to be dismantled in the name of progress. With that in mind, and enabled by the new space and with an improved work/work balance, I have recently entered into a more condensed mode of production.

With the overlapping and contrasting concerns of the paintings and woodworks I like to create new landscapes of popular culture. The work could be seen as a visual examination of popular culture’s relation to beauty and labour. A recent work Metric/Imperial is a departure for me in the sense that it introduces nature, in the form of a bird-shit effect, to this examination. Works in progress include a few more woodworks and a colourful painting based on the Niceday pattern, but with some new elements that evolved out of the original design. 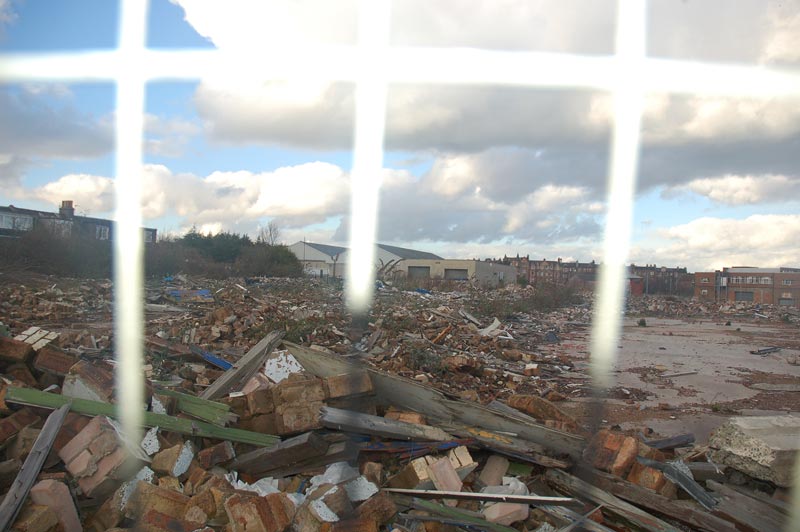